Sports is something that humans start from a very early age during school, middle school, high school, university and so on. Some activities are really intense, especially when it’s nearing a competition or a series of competitions. When the activities get so much intense, our body starts to weaken or get stressed or the most common one, accidents. This causes the body to develop an injury and even a series of injuries, either minor or severe which will put our performance into question.

Injuries are actually very common during sports and there are loads of tablets, sprays and other medicines to cure them. But the problem is, most of the injuries that happen are not visible and therefore, are not external injuries. Here as we all know with experience, that there is an internal damage to the tissues or muscles and the severity of the injury is impossible to find out on the spot and therefore a well renowned doctor from the US wanted a solution that solves this problem.

So the challenge was to determine the extent of that particular injury in the field of sports. We had to create a solution that makes it easier to detect the level of severity of the injury and also a one that provides all the necessary data as quickly and as accurately as possible.

After a careful analysis of some previous cases of injuries at different levels and different parts of the body, we decided the basic and the most important requirements.

In order to build the proposed solution, many researches and choices had to be done when choosing the temperature sensor, wireless communication method and also on the specific materials that were going to be used in building the device. The solution in simple words, is a “wireless biotherm gauge”.

The Biotherm Gauge which was designed, consists of a 1.7cm square probe made of 316 stainless steel (specific heat 500) pieces encased in a 1mm thick Teflon (or silicone), with one surface exposed, weighing 20 grams in total. A temperature sensor is placed opposite the exposed surface, but inside the Teflon housing. The sensor is connected wirelessly to a laptop computer where the temperature is chronologically recorded and the total heat generated by the injured tendon and or muscle is calculated using a formula.

Out of the different temperature sensor options to choose, we chose the semiconductor based one due to its accuracy than any other methodology at just ± 0.5℃ of uncertainty. Apart from that we also needed to decide on the way of transmitting information, either through Wi-Fi or bluetooth. When comparing the two, bluetooth uses less power compared to Wi-Fi, but is 10 times less in range. Since our solution is a battery powered solution we chose to go with the bluetooth technology.

For our solution, the injury level identification is the main task and for those we had to build two main devices, they are as follows:

For the phase one, a prototype was built by integrating the microcontroller, bluetooth module, temperature sensor and the battery which was in fact large in size. Then the microcontroller was programmed to read sensor readings and thereafter to send the data through the bluetooth module. Next, the enclosure design for the prototype was done using stainless steel and non-conductive materials. Additionally, a simple desktop application was built to get the data and to calculate the heat generated. As for the final touches to the devices, a display to show the temperature readings, on/off switch and incorporating serial communication was added to the solution. 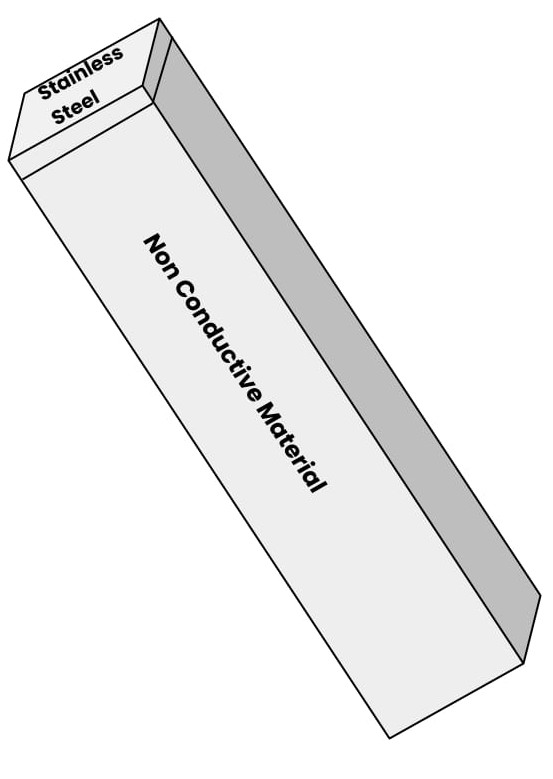 For the phase two, after doing the tests with the prototype we had to design and increase the solution’s user friendliness. Therefore, we added a few things both at the hardware and also at the software levels. The codes were modified to read battery levels, added the circuitry needed for charging, added 3 LED lights to show different statuses and a PCB board was designed so that the final product can be a smaller and more easy-to-carry size. Moreover, we developed and enhanced a mobile app specially designed for our solution by focussing more on user experience.

After developing the proposed prototype, we moved onto the testing and debugging phase and later after the final product was built we carried out a series of tests to ensure that it aligns as per the commercial product requirements. The developed product was able to identify the exact spot of the injury and its level of severity, send all the relevant data within milliseconds and display those data with accurate results.